The story of the Skop family's flight across the Sound. In October 1943, the family consisted of Frederikke and Samuel Skop and their children, Miriam 11 and Aron 9.

Simon Altermann contacted his sister Frederikke Skop
to warn her of the imminent Nazi operation against the Jews. "You must hide". The same night the family hid in an attic. German soldiers knocked on their door and searchlights were trained on the apartment. However, receiving no response, the Germans were forced to move on empty handed.

Samuel Skop contacts Master Baker Petersen, an acquaintance who both lives and owns a shop in the same block of apartments, to ask him for help in hiding his family and if possible in establishing contact with a fisherman. The Master Baker immediately offers to help and the family is hidden in a small room of his.

October 4th 1943
The Master Baker has established contact with a man who has promised to help them across the Sound. It is agreed that the family is to take the train to Snekkersten Station the following day where a man carrying the daily paper Politiken will meet them.

The family leave for Snekkersten. They carry no luggage but wear as many clothes as they can without arousing suspicion. It has been agreed that the Master Baker will advance DKK 4,000 to the contact to cover the expenses of the journey to Sweden. To raise the amount needed, Samuel pawns his gold watch with the baker for the sum of DKK 500.

As agreed, the contact meets the family at Snekkersten Station and leads them to a small attic room at an Inn. The contact now demands extra payment, which the family is unable to provide, as they have no money left. The contact then disappears.

Despondent and almost resigned to their fate, the family takes to the road early in the morning and heads for the Coast Road. Suddenly a woman who was up early cleaning her windows waves them aside. She has guessed that they were a Jewish family on the run and invites them into her home. She then immediately contacts an acquaintance Dr. Jørgen Gersfeldt who at once promises to help them. On the same day, the family move into a summer cottage at the disposal of the doctor.

The family remain hidden in the cottage. Their mood ranges from despair to hope.

The family are told to keep themselves at the ready. Late in the afternoon, a garbage truck filled with blankets picks them up and drives on to a number of other summer cottages where other Jewish families are hiding. As soon as the truck is filled with refugees it drives on to a wood where everyone are told to get out. In groups of ten, the Jewish refugees are led through the woods to the coast where large rowing boats carry them out to the waiting fishing boats.

Despite motor problems, the fishing boat arrives at Helsingborg an hour later, where soldiers in green uniforms greet the refugees. The green uniforms awaken unpleasant associations, however soon the refugees realise that they have indeed arrived in Sweden and that they now are safe.

Around June 1st  1945, the family returns to their apartment in Copenhagen, which kind neighbours have taken care of in their absence.

We are happy to announce that the museum is getting a new point of entry, designed by the world-famous architect Daniel Libeskind. However, this means 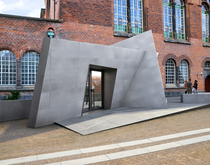 Now you can catch a glimpse behind the scenes at the museum, and see what else is going on. Follow us @thedanishjewishmuseum

Talks, guided tours, films and music - find out what's going on at the museum.

- an exhibition about Jews in Denmark

The exhibition is a broad story of Jewish life in Denmark and focuses on co-exixstence and indentity through 400 years. Read more...

The museums is currently closed due to renovations.
We expect to reopen at the end of August or the beginning of September.